David and Ryan Crone joined with Mark Crawford and John and Jessie Tulio to celebrate the graduation of the 2016 class of Deeper School of Kingdom Life in the Philippines. The students were presented by Nation Directors Jon and Marcia Tulio.

Along with speaking at the graduation ceremony, David and Ryan ministered in two churches in the Manila area. A woman deaf in one ear, another partially blinded by glaucoma, and a man in great pain from arthritis were all healed. Ryan ministered in the word of knowledge in a high school class in Bacolod.

The leadership team of Deeper School Philippines met together  for 2 days of fun, relationship building and leadership training with David Crone and Mark Crawford. Jon and Marcia Tulio, Deeper Philippines National Directors, have gathered a great team of world changers to lead the school this year: Jackie, Anna Lisa, May, Karlo, and Kim.

Leaders and Sounds of The Nations Conferences- Fiji - July 2016 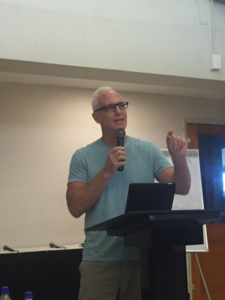 80 pastors and leaders from around Fiji gathered for training and impartation from representatives  of all the 5 fold ministries. The 4 days of ministry and activation was hosted by Kili Mawa and the Mission Fiji team. Teachers included Joel Butz, Mark Crawford, Gary Hopkins, Rod Dowie, Caleb Byerly and David Crone.

Sounds of the Nations founder and International Director, Dano McCollam gathered directors from New Zealand, Australia and The Mission, USA, for a 3 day conference. The week ended with a concert featuring worship from various countries and the commissioning of the new SOTN Fiji National Directors, Sam and Iva Koliloa.